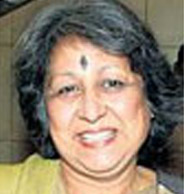 Rathi Vinay Jha (President) retired as the Secretary, Ministry of Tourism, Government of India in 2004. Prior to that she has held many positions related to the crafts sector. She was one of the founders of NIFT and served as its Executive Director from 1987-93. She was also the Managing Director – Tamil Nadu Handicrafts Development Corporation and CMD – COOPTEX from 1985-87. After serving the government she was the Secretary General of the World Travel and Tourism Council India, and Director General of the Fashion Design Council of India. She was a Member of the NIFT Board of Governors and Chairman of the Durgabai Deshmukh College for Visually Impaired. Currently she is the President of AIACA Governing Board, Chair of Indian Heritage Cities Network ( IHCN ), and Member Board of Governors of Indian Foundation for Arts ( IFA ), Madras Craft Foundation ( MCF ), Plan India, Sasakawa Foundation, The Coorg Foundation, C to K Foundation ( craft sector in J&K ), and the Indian Institute of Craft & Design.